President Obama is making a speech to the nation’s schoolchildren, welcoming them back to school and emphasizing the importance of a good education.

People are mad, and I am not one of them.  But I can see why they might be pissed.

If it is just a “I wouldn’t be where I am today without a good education” speech, God love him.  Every student needs to see that endless hours sitting in a classroom actually LEAD to something.

However, no matter how much you like the guy, he is a politician.  If it devolves into him talking about policy, I don’t think it should be shown.

Not because kids don’t know that government plays a role in education.  Not because kids will go home and pester their parents into supporting his agenda.   Not because I think it would be better shown at home, not at school, where parents can discuss the speech with their kids.

No, it is much simpler than any of that.

The Physicians Committee for Responsible Medicine recently ran an ad campaign that mentioned the President’s daughters: 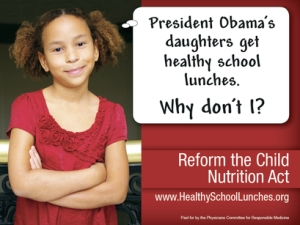 The White House took issue with this and asked that the posters be removed.

“We’ve been very clear I think from even before the administration started that their two girls would have a very private life, and we want to protect that private life and their privacy,” White House press secretary Robert Gibbs said this morning when asked about the PCRM posters.  “And we hope that others will be respectful, as many in the media have been, about not using the girls as a publicity stunt.”

I happen to agree with the White House on this one.  I don’t think children should be used as a way to gain publicity, or to push an agenda.

So, I ask President Obama, are you using my kids as a publicity stunt?

If the politics are turned off, and you are really just giving an education pep talk, I think it is a great idea.

If you are going to talk policy, shame on you.

If your girls are not to be used for political purposes, than neither should my boys.