The Winner is…US.  Because this season is FINALLY over.

Okay, before I get into the designers, I have to comment on Heidi.  WTF was she wearing?  A hot pink pant suit?  She looked like a freakish evil school principal.  The skinny pants do nothing to tone down her bow-leggedness and her makeup was way too harsh.  My other favorite gay stylist, Clinton Kelly, would die of shame over the fit of that jacket.   Was it supposed to just barely close on purpose?  On the plus side, she did get a little bit of a facelift from the bun.  I find it hard to take her opinions on fashion seriously when she comes out looking like this.

And then there was the guest judge.  Would you take this woman shopping with you?

There’s Something About Mary needs their hair gel back. 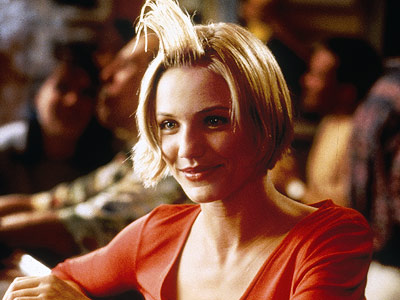 Seriously the winner was Irina, which came as a surprise to no one except possibly her father.  Was he crying because she won?  Or because now there would be no living with her.  Kinda what Megan is going through about now with her husband who had Meana in the pool.  You’ll get ’em next year, sweetie!

But back to the work room…

Carol Hannah managed to pull herself together (after a little snuggle from Logan, and honestly, who wouldn’t cheer up after that), get her head out of the commode, and actually compete.

Irina spent most of the time rolling her eyes and accusing Althea of stealing her collection, her high school sweetheart, her car radio, and her lollipop.  Ooooh…smokey eyes are something only you could have thought of, Irina.  Grow up.

Althea, honestly, I don’t remember much about Althea.  Loser edit…

They all ran around like chickens with their collective heads cut off, trying to finish last minute details.  The best part of the pre show being Tim Gunn almost losing it wondering why everyone wasn’t lined up.  Because, I’m sure, fashion shows never start late.

Personal pet peeve…why do girls/women always talk like Playboy Playmates when they speak in public?  All of them framed almost everything they said as a question?  Like, I’d like to thank my family?  I hope you enjoy my collection?  They hunched their shoulders and folded around the microphone.  Ladies, grow a pair.  Be proud.  You survived the weakest season in Runway history and are showing at Bryant Park.  Own it.

First down the cat walk was Althea:

Wha…whe…what?  Sportswear?  A sportswear collection?  First of all, where were all these pants before?  Now, to really wow the fashion industry at Bryant Park, you do sportswear?  Aye carumba!

I would like to commend Althea on her use of color.  But I can’t.  One green dress just isn’t going to cut it sweetie.  An all neutral collection isn’t much more interesting to look at then an all black one.

The sweaters were nice, but good luck going to the bathroom in those sleeves.

And while some of the pieces were cute…this was not a collection.  The only thing to tie it all together (besides the snooze inducing color palette) was her use of skinny belts.

Hey honey, Irina is the one who belts everything.  Maybe you really are a psychic fashion terrorist!

Pretty metallic dress with a train…although where have I seen that before…?

And that was the problem with Althea’s collection.  We’d seen it all before.   And better.  No one could hope to pull off pants and a little jacket better than Christian did last season.  And it was only last season!  While that was an almost decades wait for us, it was a real time year for the judges.

Well, someone found their box of crayons.  Well, at least the aubergine and slate blue ones.  Still a shocking amount of neutrals.  But the judges commented on her being the only one with a color palette…so who am I to judge?

Again, nothing Earth shattering here.  The long blue dress and the little black dress are so pretty and wearable…aka the kiss of death in the Project Runway world.

She tried to recover with the silver grey toilet brush dress, to no avail.  I realize this isn’t actually meant to be worn, but the tulle looks like it turned grey from being stored in a West Virginian attic for too long.  Under the lights, the top and bottom look like different colors…and not on purpose different colors.

And why all the sudden is a butt cheek dress length acceptable?  Last cycle they were all over people for skirts that were uber short.  I guess if you drape it in grey gathered toilet paper it’s alright.  One long stride, ladies,  and that little grey dress will give up all your secrets.

This one came closer to being a collection, but no matter how hard I try, I just can’t see the thread that runs through them all.  I had such high hopes for Carol Hannah.  I really felt she was the only one that could give Irina a run for her money.

Which brings us to

Black.  Black.  T Shirt.  Black.  Strappy stuff.  Felt helmets.  Black.  Oh, and a chunky sweater…since she was the first person to think of it.  And fur.  Another Chewbacca vest.

Nothing about this really stood out for me.  I really dislike the evil little eye roller, so it is hard to get all giggly about her clothes.  And apparently, since she couldn’t use Coney Island for her t shirts, she jettisoned it as her inspiration.  Good thing too.  If she had told Nina that a carnival was her inspiration and then shown a black collection…well, I think Ms Garcia’s scolding glare would have been followed by her head exploding.  Which come to think of it, would have added some much needed color to the collection…

And why, WHY did no one call her on the fact that out of 13 looks, 11 of them involved leggings?  ELEVEN! (Insert Spinal Tap joke here.  You know who you are.)  The other designers might have had better looks too if all they had to think about were the tops.  Sure, some of the leggings were torn, or gathered.  But they were all leggings!  What’s even more astounding is that the only skirt was her 13th look, and the dress wasn’t finished when she got to New York.  So originally there was only going to be one non legging look, and it wasn’t even finished.

So.  We can put this season in the books and pray to the reality tv gods that some real designers showed up for the next cycle (apparently filming as we speak).  A couple of notes for the producers…hopefully we are not too late.

2.  PICK SOME DECENT PERSONALITIES THIS TIME.  This season was like watching beige pumps.

3.  AND LET’S TRY FOR PROMISING DESIGNERS.  No offense to Carol Hannah or Althea, but this whole group was mediocre at best.  The Bob Mackie challenge is the benchmark that this group will be judged by.  They failed miserably.   Next time find someone, anyone that knows how to take a fashion risk and make something great.  Not a chicken and the egg outfit.  Please, I’m begging you.

4.  MORE TIM GUNN  Was it just me or was there a glaring lack of “Make it work” this season?

5.  AND FOR THE LOVE OF PETE, GET THE SAME CORE JUDGES EVERY WEEK.  Sure, Nina might need an emergency facial peel and miss a week.  But the lack of consistency in the judging this season threw everyone off their game.  And as much as you aren’t supposed to just study the test, the designers need to know what direction of risk is going to bring reward vs ruin.

So, I guess now we just sit back, watch a little Gown Crazy, and twiddle our thumbs until next year.