(For those of you who could really care less about Christmas Cookies, I suggest you just skip this one and wait for the resumption of the Christmas Countdown tomorrow)

For my family, Christmas Cookies are their own religion.  Recipes have been passed down.  Certain cookies may not be baked except between Thanksgiving and Christmas.

The Grand Cookie Baker was, without question or challenge, my Great Aunt Dorothy.  Every season she would retreat to the bowels of her kitchen, not to reappear until she had tins and tins of cookies of all kinds.  It was its own Christmas miracle.

Her most amazing creations were the Santa cookies, and their lesser cousins, the decorated cut outs.  I never in my wildest imagination would I hope to make confections of such perfection of taste and form.  It is simply beyond the reach of us mere mortals.

My other favorite, was the Meltaway (because they just melt away in your mouth).  A compact ball of butter, walnuts and sugar, they will always be one of my favorite cookies.  They were laborious, if not impossible, to make.  And mine always seem crumbly compared to hers.

So imagine my shock to see a box of cookie mix for “Snowballs”.

The picture on the box matched my childhood meltaways to perfection.  I quickly put a box in my cart and scurried out of the store.  It felt so wrong to try and shortcut the perfect cookie recipe.  But I was out of time to make cookies and I REALLY wanted some Meltaways.

Today, I pulled the box out and decided to take the plunge.

This is the box and what comes in it.  Not too promising, but this was a shortcut.  At least I don’t have to chop walnuts!  The only ingredient not in the box was the butter.

I dumped the butter and mix into a bowl and went at it with my hands (the only way to really get the whole mess to gel).  It felt less crumbly than Aunt Dorothy’s recipe.  That might not be a bad thing, since mine always turn out a little on the dry side.

Then comes the fun part…turning a lump of dough into three thousand little rounded teaspoon balls.  They seem impossibly small when you make them.  But then the point is to just pop them in your mouth and have them take you to Christmas happiness. 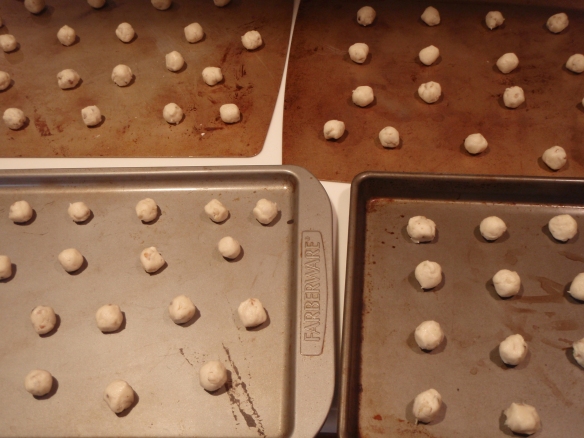 (Pay no attention to the seemingly filthy cookie trays.  Some kind of trick of the light)

At this point Joseph stopped by to make himself his own sandwich:

Yes, that is a bologna and chocolate chip sandwich.  But he made it himself!

So after a little time in the oven and some time cooling on the racks, I rolled the little buggers in powdered sugar.  They looked right.  They smelled right, but would they taste right? 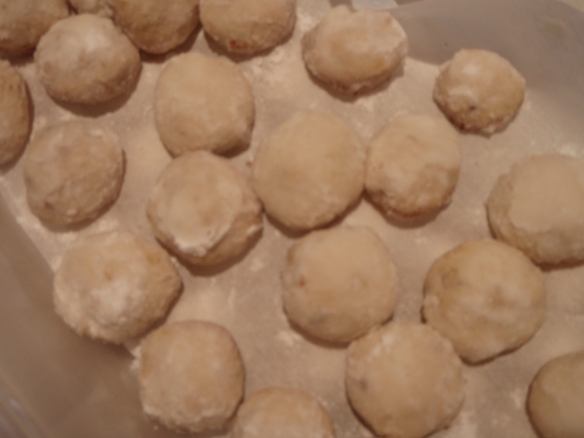 Well, they passed.  They were not the perfection I remembered from my youth.  But they were good and tasted like Meltaways.  They are a little sweeter than Aunt Dorothy’s.  And one wouldn’t necessarily think that would be a bad thing.

All in all, if you don’t want to put the time in to make the ultimate Christmas cookie, this “snowball” mix works pretty well.

I have already managed to eat about 15 of them, so obviously they will do.