Second game of the season for Al’s Grill.  The weather was crappy, can you say blankets and mittens?  But the boys couldn’t wait to get out on the field and have another go at baseball glory.

J got his first pitch ball hit at his first at bat.  The smile was contagious.  As a Mom I gave out a huge sigh of relief: now that hurdle had been passed.  He wouldn’t be hitless for the season!!  It was a solid ground ball through the infield.  I am a big fan of ground balls. 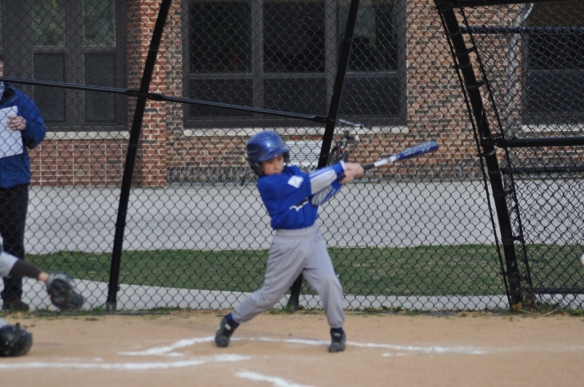 It was then I realized that we were playing a team full of Jack’s friends.  So I headed over to the third base line and enemy territory to chat a bit and try to forget that I was losing at least one toe to frostbite.  While basking in the glow of J’s hit, I saw a new kid take the rubber.  It was J!!  Just so you know, he has be dying to pitch.  Me, well, I was looking forward to it with the white knuckle terror all mothers feel when their baby tries something new that they really want to succeed at.  A mantra of “Oh Crap” went through my brain.  Not because I thought he would do badly, but because I knew how much pressure he’d put on himself to do well.

First pitch in the books, and it was a strike.  He did really well his first official inning as a pitcher.  I was too “mommy” to know every stat, but I know he struck out one batter, and they only scored 3 runs that inning.  Not too shabby.  And look at this delivery: 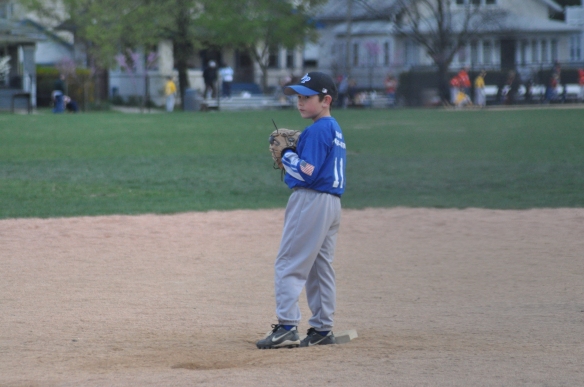 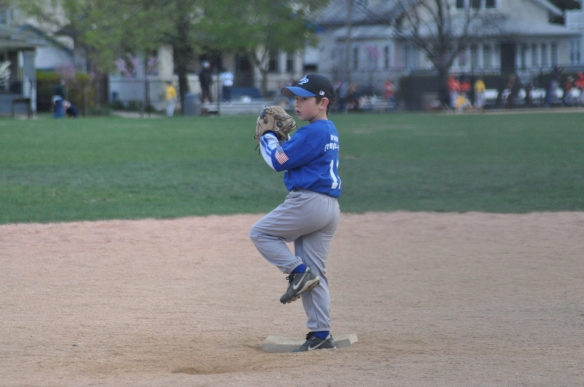 the kid’s a natural.

I thought my moment of Mommy torture had passed when it became clear that J would pitch for a second inning.  Well, at least they liked what they saw.

Round two went spectacularly well!  J gave up one or two walks, but he

STRUCK OUT THE SIDE!

That’s right ladies and gentlemen, he struck out the side.  That’s my boy!!  He was so excited I thought he might literally jump out of his skin.  And though my first reaction would have been to storm the dug out and lift him into the air with a giant bear hug with lots of smooches, I managed to keep myself together.  Instead I gave him the thumbs up and “Great inning, J.”  It almost killed me.

J finished out the game with a walk and some fielding time.  As the sun set it became clear that we would have to call it on account of darkness.

A rare tie for the final score.  J got a “no decision”.