Seeing as how the Bigs are gearing up for the All Star game, I thought it was about time I got off my duff and told all of you about the All Stars here in the OP leagues.

Al’s Grill sent J to the 9 year old All Stars.  He was really proud, and felt that this was only fitting given how marvelously he pitched this year.

You could drink the air (when did I move back to the tropics?) and we had a heck of a time keeping the boys hydrated.  But J couldn’t wait to get out there and make some history. 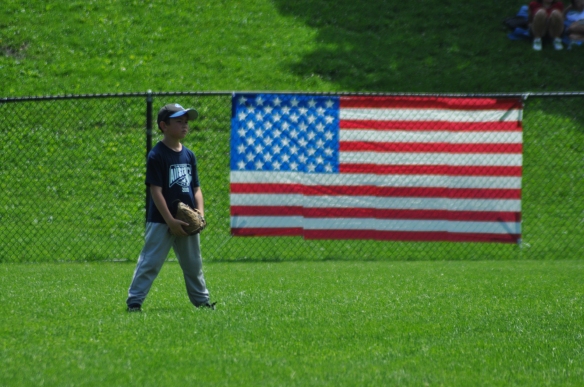 I couldn’t have scripted that scene better.  Look at my boy, playing the all American game in front of Old Glory.  Brings a tear to your eye…

His first at bat of the game he got his second hit of the season.  Couldn’t have come at a better time.  He hit a screaming line drive over the outstretched, leaping glove of the shortstop.  These boys know how to play, though, so he was held to a single.  He went on to steal both second and third, and his teammates hit him home to put the first run on the board.

After the first inning in the outfield, J got to pitch.

Tell me that isn’t a kid putting everything he’s got into each pitch!  He gave up a hit or two, but struck out three batters and didn’t allow anyone to score.

His next at bat he took one for the team in the arm, and again blazed around the bases in a streak of stealing glory.  This time he had to settle in at third, they couldn’t quite bring him home.

All in all, a great performance and a great day.

O man, didn’t actually play in a game.  Instead, he got the Sportsmanship Award.  What that is exactly, I couldn’t tell you.  And O man was certainly curious.

He was presented the award by our beloved Coach Joe, and then quickly opened the box to see what all the hullaballoo was about.  Well, if I am a sucker for K.A. gear, O man is a sucker for an award.  And this one is about the size of a dinner plate.  Not only is it huge, but it has his actual name engraved onto it!  He immediately requested a shelf be put up in his room so that it might be displayed in all it’s resplendent glory.  Well, that was after he insisted we get it back in it’s box ASAP so it wouldn’t get dirty, or broken, or dirty. 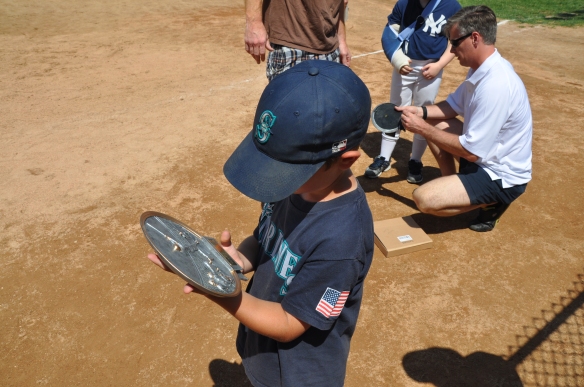 The Rookie didn’t get an All Star nod this year.  Even with a .990 on-base percentage, he just couldn’t compete with the bigger Mariner stars.

Now we switch focus to the trading deadline…