What a great post season this year! True, the Cubs are about as far away from October baseball as humanly possible, but there are (were) small market teams, which makes me very happy.

Most seasons I find myself routing for the small market teams; teams that don’t get a lot of love or attention unless they are actually winning. A post season slot can mean a lot to them: for money, exposure, growing a fan base, and money. Of course, sometimes being really good still can’t fill seats, but it can’t hurt.

This year, I had teams on all sides of the argument: Detroit (my new home state), the A’s (small market), the Reds (my Division). But I realized last night that my heart truly belongs to the Nationals.

You might think this is because they haven’t been to the playoffs since they were the Senators, and in the American League, in 1933 (I am not counting when they were the Expos because why would you?). But even though as a long-suffering Cubs fan, that type of story resounds with me, it is not.

You might think that it is because they finally let Teddy Roosevelt win the mascot race. And while this warms my soul (he created all the National Parks I love so much), it isn’t the reason either.

This year, my heart belongs to the Nationals because of a silly little t-ball team. 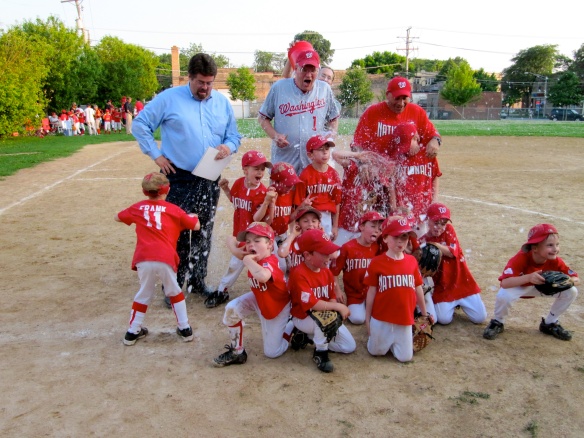 I can’t help but think of two of my Terrors, regaled in National’s uniforms. I’ll never forget J hitting home runs and O-man actually catching a fly ball in right (even the opposing team wept tears of joy on that one). I can’t help think of the first time I talked to Coach, begging him to let O-Man on the team (they split the Terrors between two teams…not gonna happen). I remember the fun and the munchkins and all the things that came to mean so much to me over those crazy t ball years.

So tonight the Terrors and the DH will be, mistakenly, routing for St. Louis. I’ll probably go down in flames, since the Cardinals seem to always be on the right side of luck. But no matter how much I love my St. Louis family, I want those Nationals to win

1 thought on “Boys of October”