A posting or so ago, I talked about the O man and his pizza pie-sized award for sportsmanship.  The other award that they all get every year is the dreaded Bobble Head Trophy.

I cannot describe how much I despise these stupid trophies.  Before I continue my rant, take a good look at the creepiness that is the OPYB/S Bobble Head trophy: 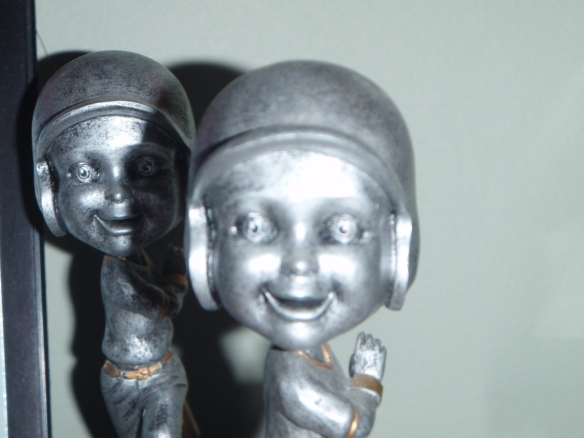 If that isn’t the f*cking creepiest trophy in the WORLD, I’ll eat my hat.  They are actual, functioning bobble heads.

I have 5, yes that’s right FIVE of these things staring down at me from various locales in my home.   I should have more, but due to just plain luck, some have never crossed into my home.  Stay back demons!  You are not welcome here!

The worst part of it is that no one can remember a time before the bobble head trophy.  This means that not only have they been getting them since time immemorial, but that it looks like they will continue to get them forever.  Which means I expect to have these things multiplying like psychotic nodding rabbits on my mantle until the terrors finally give up on organized baseball.  And since you all know me well enough to be reading this, you know that that will be a long time coming.

I don’t understand why we can’t get a trophy with a baseball on it, or a glove, or a base, or anything other than this vacant eyed Chuckie impersonator.  Perhaps they were breaking the mold and you could get shipping containers full of the things for practically free.  That’s gotta be it, since it’s hard to imagine anyone willingly handing over cash money for them.

Some people might like the continuity of a giant queue of the same trophy over and over again.  Or maybe the guy in charge just really likes them (really?).  I know I shouldn’t complain.  Participation awards aren’t about aesthetics, they’re about building the boys’ self esteem.

I should just shut up and just enjoy the thought.  That’s what’s supposed to count, isn’t it?

2 thoughts on “The Trophy From the Black Lagoon…”